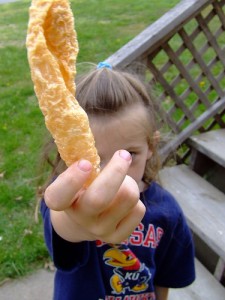 So I’m not in a position yet to tell you who has the best pork rinds out there. That’s not what I’m saying. So far I have tried Baken-Ets & Mission brands.

Not much noticeable difference.

What I will say though is that within a bag of pork rinds, there are better pork rinds and worse pork rinds.

First of all, I haven’t been on the pork rinds for many, many years.

I recently read Gary Taubes’ book Why We Get Fat: And What To Do About It and it made enough sense to me to give some of his dietary recommendations a try. Now it isn’t a diet book, it’s a scientific book on why carbohydrates make us fat (along with many other points). It does touch on some dietary guidelines though.

So I’ve gone no/low carb as an experiment for a while.

It’s about a week since I started & I’m down 7+ pounds already.

I believe most of this is water so I’m not claiming success or anything yet. In the beginning, I know I’m using up the glycogen stored in my muscles. Glycogen is glucose and a bunch of water. As the glycogen is used, all of the associated water molecules get released and excreted. So that’s why everybody experiences a huge weight loss in the first week or so.

I’ll get into what I’ve actually been eating another day.

But I HAVE been eating pork rinds.

For me, one of the things I need is texture.

Pre-this diet, I’d often find myself in the cupboard looking for crackers or chips or pretzels. Something with some crunch. I think I need that.

It got particularly hard for me on the 2nd day of this program when I was at my sisters for my nephew’s birthday party. There was all kinds of great food around: crackers & amazing cheeses, chips & homemade salsas & homemade guacamoles, vegetables with hummus, etc. Anyway, seeing all that for hours on end started freaking me out. I needed something with crunch!

So I ran to the store & picked up a bunch of pork rinds & some deli ham. Those together killed my cravings & I was ok.

Since then, I’ve eaten pork rinds pretty much every day. They’re zero carb so that’s what counts.

Well back to my original point. There are good pork rinds and there are bad pork rinds.

Or maybe I should say there are good pork rinds and better pork rinds.

Now I’m good with your standard puffy, light, crispy pork rind but the great pork rinds are those dense, super crunchy, hiding in the bottom of the bag pork rinds.

THAT’S WHAT I WANT!

My guess is that it might not be possible to make all pork rinds that way & the differences are just a byproduct of the cooking process but wouldn’t it be amazing if someone could release a version of only the dense, super crunchy, super crispy pork rinds?

The King of Pork Rinds! (I could live with that.)