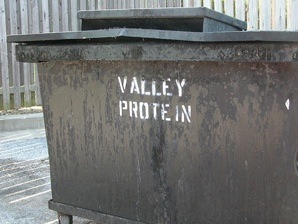 I’m specifically following the program outlined by Lyle McDonald in his eBook, “The Rapid Fat Loss Handbook -A Scientific Approach to Crash Dieting”.

This guy is someone who has been involved with bodybuilding and training for a long time. I figure that the best way to learn or accomplish something is to go to the most extreme example out there regarding whatever it is. So here I am with a bodybuilding influenced program.

The philosophy behind PSMF is that  you go super low calorie to help you lose weight but you eat enough protein so your body doesn’t break down muscle and use that.

The basics of this specific program are:

The things I’ve implemented so far are the low, low calories via protein; omega 3s in the form of fish oil capsules & lots of water. I’ve got to phase more veggies in, get a multi-vitamin and figure out the program length & breaks.

For me, I think the toughest part is going to be mental.  I’ve just started & already I’m struggling.

I’ve identified a few major influences in my life that I haven’t payed much attention to.

I’m putting a few systems into place to help cope.

So that’s what I’ve got so far. But at least things seem to be heading in the right direction.