The show was absolutely incredible. Jake was amazing. His playing was unbelievable and he was just so likable. He told a bunch of entertaining stories and seemed so nice, so real. I’m so glad we went – and so glad Heather was there and the girls as well.

The venue was perfect for him. With some of the YouTube videos I’ve seen, you can see he plays in all different kinds of places. The Orpheum really added to the experience. It was stately, quiet and had great acoustics – really helped you focus intently on the show. It was our first visit to there ever. What a great theater!  It’s beautiful, very ornate, has tons of character but it is still quite comfortable. I loved it. Whenever I notice anything interesting playing there, the venue will definitely add to the draw. 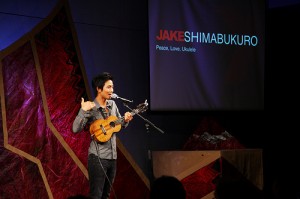 I went with Heather, our 5  year old and our 2  year old. I’m totally impressed at how good the kids were too. The show was just Jake playing on stage for almost an hour and a half with nothing else to occupy attention. It was dark and completely quiet. With the whole crowd so quiet and focused the entire time, I just wouldn’t have expected them to handle it as well. They were awesome though. They really enjoyed it too. Marina was clapping like mad and Sienna was grooving to tunes much of the time – not bad for 8:00 to 9:15 when they were already wiped out. Sienna even asserted that she really wanted to thank him after the show.

Jake did come out afterwards and signed autographs (on everything including ukuleles that many folks brought), took pictures and talked with everybody. They had a few CDs for sale, a t-shirt and a few other things. He was still going when we left (at least an hour later). The girls met him, talked with him and took some pictures with him. He was wonderful with them.

So to the show…

Live album with many of the songs he played tonight