This has been a good week for my kids.

They got report cards and both (of them in school) did really well.

We’d been working with my oldest to make sure her grades did not drop and had determined that if they were at a certain threshold that she’d have to put ballet on hold to concentrate on her studies. She really rocked things in the last part of the year & brought everything up across the board so we didn’t have to do that. She, my wife and I were all very happy about that.

Then we got to go watch the kids dance (ballet) this week too. They do parent’s viewing once a year so we really never see much of what is going on with all their classes. With the younger one, it was great to see her and she is doing really well. It was quite similar to the parent viewings we’ve had over the years. It was great.

With the older one, I was pretty shocked by the intensity and difficulty of the classes. I was blown away by how much work it is; how serious it is. And I guess I have to say that I am extremely impressed that my older one loves it so much and is so devoted to it. It’s definitely not goofing around fun. It’s work. And hard, technical, attention demanding, long session work. I loved to see how committed she was to it and how well she did. I don’t know that I would have expected that.

Anyway, it’s been a good week and on top of that, they’re just awesome (albeit normal kid challenging) people to be around.

Ok. So we’re pretty attuned to parenting displays because so much of our lives revolve around that. Just completely shocked today by an encounter we had at Mojo Yogurt.

We spent pretty much the entire day with the kids. Hanging out at the house, watching a movie, dropping the 7 yr old off at ballet, getting coffee, hitting a few stores, having dinner and then we ended up at Mojo Yogurt. The girls were pretty great today and it was a really nice day.

When we were at Mojo though, Heather saw (this was all conveyed to me afterwards) this mother asking her young son if he’d sit on one of the little chairs so she could have the full sized chair. He was surly & ignoring her & being pretty much an overall brat. Our kids weren’t really aware of this as they were in the chairs in front of the TVs where movies were playing and completely focused on them – as were the mother & her son.

So as Heather sees this, she asks our 7 yr old if she’d go sit in one of the smaller chairs so the lady could have her full sized chair. She jumps up and moves right away. Now this lady’s son jumps up and takes the big cushy chair that my daughter was in. The mother asks him if she could have the chair and he just turns away and ignores her and lolls about.

I find out the details later and realize that Heather was about ready to lose her mind. She didn’t ask our daughter to give up her chair so the brat kid could have a nicer chair. And then the mother didn’t even thank our daughter for giving up her chair!

It’s a rare occurrence but Heather was fuming after we left. She was ready to go back in & give her a piece of her mind.

I get that there are people who don’t demand as much from their kids as we do but not even saying thank you????

He’s going to be a nice one when he grows up and I guess we know why.

I truly believe this. I try to be a walk the talk kind of person so that might be a key factor of whether this applies.

I noticed it today. I’ve noticed that my 7 year old has been yelling at my 4 year old when the 4 year old does something wrong. It’s been pretty apparent the past couple of days. The 4 year old is also firing back in the same way. As I dealt with it and thought about it, I realized that a lot of it probably comes from me. 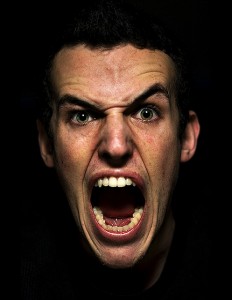 I’ve been pretty stressed out over the past several months with workload and have been more on edge than usual. I realize that I’ve been way more aggressive with my speech with the kids (and even Heather) when I get upset about something. Heather has helped point this out. With that kind of sinking in and me seeing the way the kids were dealing with each other and and with us, I’m realizing that it’s behavior that they are seeing in me & my bad example.

So I told the kids they need to bring it down several notches when there is an issue and not yell. Then I told them it is probably my fault as I’ve been doing it a lot too. So I will be better about that myself.

I can also think of another recent example of this.

We had a school parent call about a “Tom’s Club” that our 7 year old had supposedly started. This would be in reference to Tom’s shoes. I guess their child felt a bit left out & was bugging them about Tom’s. Nothing major but they wanted to let us know.

So we went on an inquisition and I guess our child had made some remarks about this with a few other kids that were also wearing Tom’s to school a while back. She doesn’t typically wear these but had that day. After our investigation (as our kids are very good about being honest and owning up to things), we came up with 4 other schoolmates that might have been affected by this.

First of all, we hate “clubs” and anything exclusionary – especially with kids. My wife cannot stand the thought of our kids ever becoming one of “the mean kids” (which I completely agree with).

So we took away our daughter’s Tom’s for good and she is going to donate them to the child at school that her class sponsors. Then we had her call all 4 kids and apologize to them and tell them she won’t be starting anymore clubs. She was quite embarrassed. Of course the parents were wondering what the heck was going on so we had a number of conversations with them as well. Most of the kids had no idea what she was talking about so I guess it wasn’t anything to the degree that we were worried about. She also was actually really, really good about the whole thing. She was regretful and not at all resentful of losing her Tom’s.

The thing that we realized is that we (my wife and I) are kind of brand junkies – especially with our interest in marketing and branding. We’re huge, huge fans of many brands and have talked about them that way in front of our kids. We love brands like Lululemon, American Apparel, Tom’s, etc. So it’s us.

I know I remember a very specific recent example of this. I love the Olu Kai brand of flip flops. I think they’re well made but they also really give me a strong connection to the time when I lived in Hawaii. We saw kid’s Olu Kais at Nordstrom Rack a couple of weeks ago and made a big deal of it – and got the girls each a pair.

So again, this behavior is being modeled from us. So we need to be better. We need to quiet down about that kind of stuff as neither of us think it is truly important. No more referring to “your Vans”. They’re “your black school shoes.” No more “your Olu Kais”. They’re “your new thongs.”

So trying to make sure that these kids grow up to be nice and good people makes us look at ourselves and change our behaviors where we see it to be applicable.

Want to be a better person, have some kids! :)

I believe that parenting is primarily a matter of will. It’s so easy to give in or give up when the kids resist or don’t cooperate.

I think that much of being a good parent is not giving in when that happens.

One of the things that I believe (heard it at a school session on their disciplinary program/philosophy) is that “a parent’s job is not to make happy children; it’s to raise good people.” This resonated with me in a huge way and it’s something both Heather and I fully embrace.

I guess I should say that being good people is one of our fundamental goals. We care a lot more about that than we do about making money or getting famous or living a life of leisure or anything like that. Of course we’re not perfect in that attempt but it is something we try to live our lives by.

With that in mind, I believe that a parent’s job is to raise their children according to the values that they hold. Don’t let your kids become people that don’t have those same values because it’s too hard or too much work. Going that route is just copping out.

These thoughts all kind of came together as I tried to put my 1 year old to sleep today. It’s his birthday today and he was not going down easily. So my choice was to let him win (as it’s his birthday!) and let him stay up and get overtired and probably have a miserable day or to just suck it up and do whatever was needed. I figured it was more important to get him to realize that he is going to have to stick to his routine and nap at the appropriate times no matter what. So it probably took me an additional half hour of standing there in a dark room holding him, ducking my head back as he tried to play and grab my face and glasses and then eventually he succumbed to his tiredness and knocked out.

Same thing with our other kids. We constantly monitor their behavior and intercede whenever we see things that aren’t in line with our value system. Of course we miss things and of course we aren’t completely consistent but we try damn hard. Raising great kids is one of Heather and my main priorities so we do our best not to let things slide. We still feel the urge to avoid battles many times a day and we do let little stuff go that isn’t really important.

On the big stuff that we think is truly important though, we just can’t fail there.